A couple years ago, a friend of mine with the last name of ERICKSON was telling me about a relative of his in California that made artificial eyes. He was describing how he used to take all the eyes out and play them when they were visiting. So strange to have another Erickson making artificial eyes – that I didn’t even know about. This week an article came out featuring Dwayne Erickson on the California Report. Dwayne worked for the veterans hospital at Fort Miley in San Francisco making artificial eyes. What a small world!

Here’s an excerpt from the article:

In 2013, a pair of tunnels opened that allowed cars to steer clear of the coastline. Then the old highway was transformed into a beautiful walking path with ocean views.

“I just gotta get out here and meet people from all over and just see the ocean,” he says. “How different it is today than how it was yesterday or the day before.”

Erickson greets everyone on the path like an old friend, whether or not they’ve ever met.

Listening to Erickson’s lilting accent, you might think he’s from Scandinavia. In fact, he was born and raised in Idaho — in a rural area called New Sweden. All four of his grandparents, and much of the surrounding community, emigrated from Sweden in the late 1800s.

“We grew potatoes, of course, in Idaho,” says Erickson. “We had all the animals, dairy, beef, and we raised other crops, grains, alfalfa and that.”

He moved to California and did well, becoming a surgeon at the Fort Miley veterans hospital. His specialty was painting artificial eyes. “I made eyes for patients that their own families didn’t know they had an artificial eye,” says Erickson.

Now, as he cheerily puts it, he’s “retired, but not yet ex-pired!” 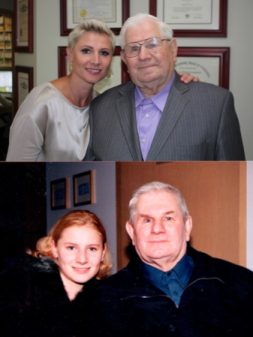 Oh, how the years go by!

Oh, how the years go by!